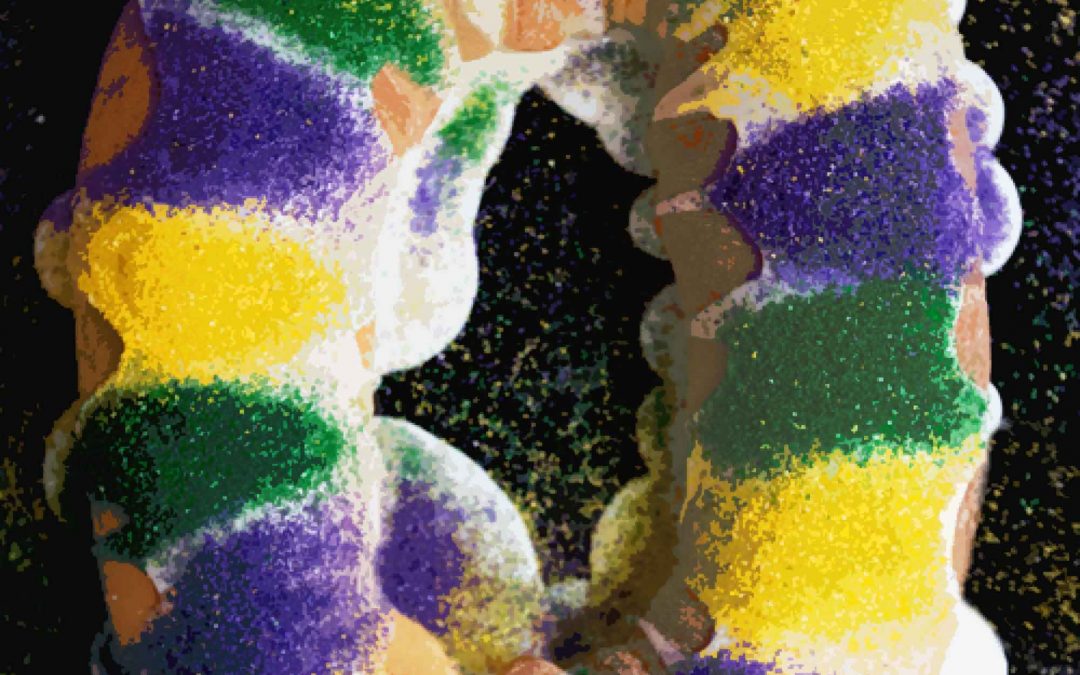 King Cake eJuice, also refereed to as eLiquid or e-Liquid, finds its roots in the history of its namesake, the King Cake.  One must know and understand his roots before he may realize where he is headed.  Accordingly, A Louisiana-style King Cake is a particular type of cake that is linked to the celebration of Mardi Gras. Beginning in early February and ending on Fat Tuesday (the day before Lent), Mardi Gras is one of the best and most famous traditions in Louisiana. The most sought-after and delicious institution of this celebration are King Cakes! A King Cake is made by warping delicious dough bursting with cinnamon into a hollow circle. It is a common practice to smother this cake in icing, and it is always sprinkled with lots of delicious, Mardi Gras-colored sugar: Purple to represent the justice of God, green to represent faith in Christ, and gold to represent God’s power.

A ritual that began roughly 300 years ago was the insertion of a bean into the cake, and now that bean has morphed into a tiny plastic baby. The plastic baby is said to represent the Baby Jesus, and the person who gets the piece with the baby retains various responsibilities, notably being the next person in line to provide a King Cake (unfortunately, this practice has been ceased as many people were choking on the baby).

Flash forward some 300 ish years and the Vape Wizards at NOLA Vape had the Eureka Moment that would change the vaping scene forever.  Alas, the Original, often Immitated, never Duplicated King Cake eJuice was born as a result of the divine inspiration bestowed to group of New Orleans  natives Working Late Nights in their flavor lab.

The King Cake is one of the traditions that defines New Orleans, and Nola Vape eJuice has captured and bottled this traditional flavor for your enjoyment. Buy yourself a bottle of the Original, Often Imitated yet never Duplicated King Cake eJuice Today!